To hear online conservatives tell it, you’d have imagined Donald Trump, at the head of an Antifa legion, crossing the proverbial Rubicon on a march to take away guns from innocent, law-abiding Americans. With GIFs of Dianne Feinstein gleefully rubbing her hands together in-tow, the President’s detractors on the Right climbed to the tops of the nearest ivory towers to light their Virtue Signals.

The Gun Discussion at the White House 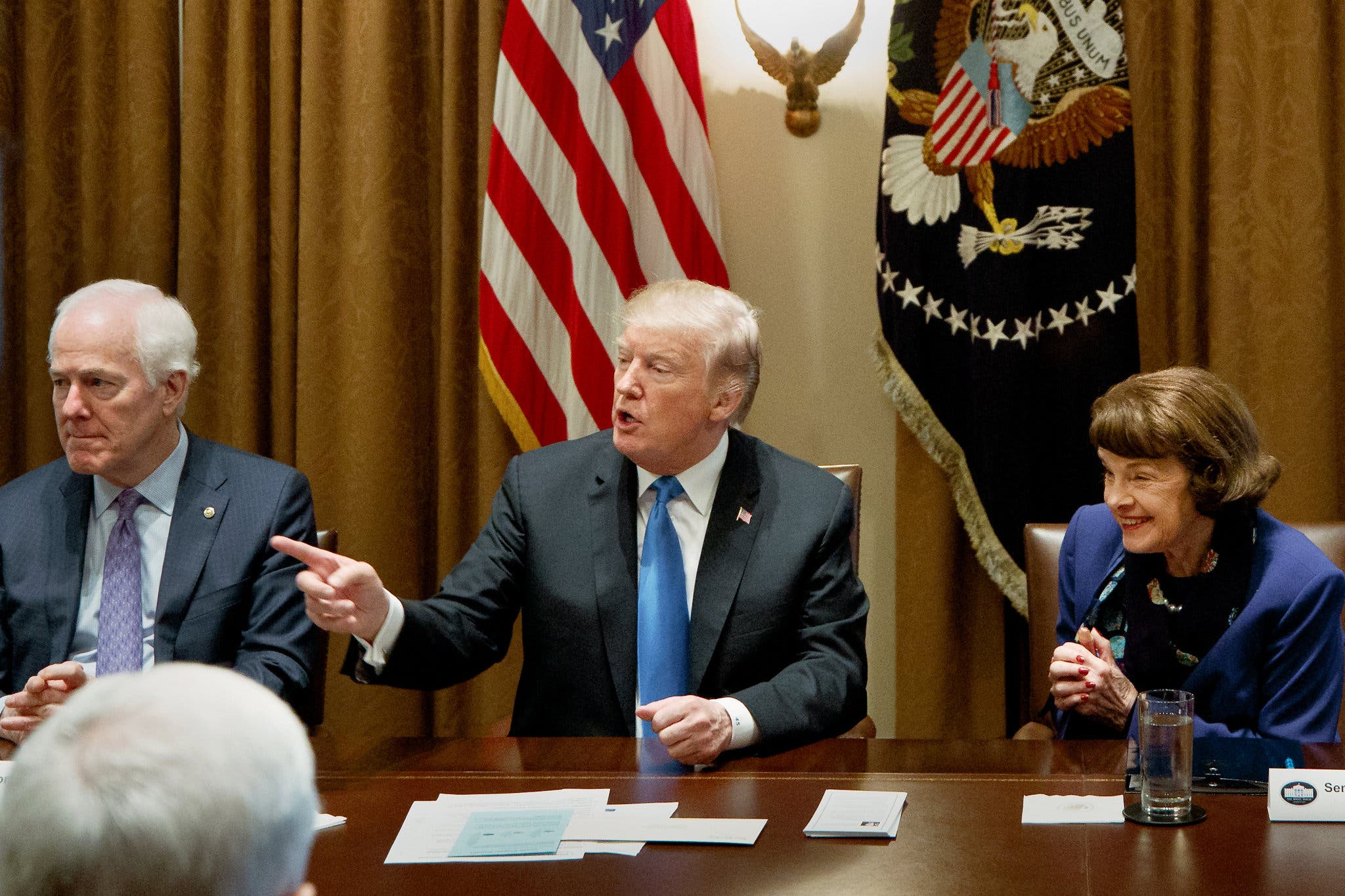 However, what actually happened at the “gun discussion” at the White House yesterday was a strategic alignment by the President on the gun issue that positions Republicans to be moderate voices of reason on the topic, and to steal a critical issue from the Democrats. Of course, this is contingent on oft-hapless Republicans getting the message.

Here’s the lay of the land: the President has been burned before by the Senate’s “filibuster” rule that requires 60 Senators to vote to end debate and proceed to an up-or-down decision on a bill. There are 51 Republican Senators—and the idea of getting them all to agree on something would make a cat herder blanch. So, obviously, in order to get something through the Senate you need at least nine Democrats. Thankfully, there are 11 Democrats up for re-election this year in states that Donald Trump won in 2016. Some of them have obstinately opposed the President’s agenda, but others, like Joe Manchin (West Virginia) and Joe Donnelly (Indiana), have been open to voting with Republicans. However, a bill must be sufficiently “moderate” to pass in the Senate.

The House is the opposite. Republicans in the House have are only going to support a measure that is sufficiently conservative.

A normal White House, as previous Presidents have done, would see this as a no-win scenario. Anything that they would support would either be too-liberal for the House or too-conservative for the Senate. Thus, best to take a rhetorical win and move on to the next issue as quickly as possible. This is not the Trump strategy. The President sees a real opportunity here to score a political victory in an election year.

We’ve already seen a dress rehearsal for this play once before on the immigration debate. The President brought lawmakers to the White House and held an unprecedented open meeting. Even CNN, the President’s  most vitriolic detractor, begrudgingly gave him credit for “showing how the sausage gets made.” Predictably, when the President suggested he’d favor a pathway to citizenship in that meeting, conservative pundits (the same who are running around with their hair on fire today) slammed the President for selling out the base, etc.

The President’s plan on the Deferred Action for Childhood Arrivals (DACA) program wound up being eminently moderate: citizenship for 1.8 million illegal immigrants who were “DACA eligible” in exchange for partial funding for a border wall, and ending the chain migration and visa lottery programs that were exploited by terrorists.

The current base of the Democrats refused to let their elected officials compromise. Therefore, Democrats were forced to abandon the moral high ground on the immigration issue. Effectively, they admitted their immigration plan is more about sticking it to Trump than helping DACA recipients. While the issue still hasn’t been resolved, it’s eminently clear that the President’s plan was to take the issue away from the Democrats, whose base will not let them compromise, and secure the middle-ground.

How to Win (No Matter What the Outcome) 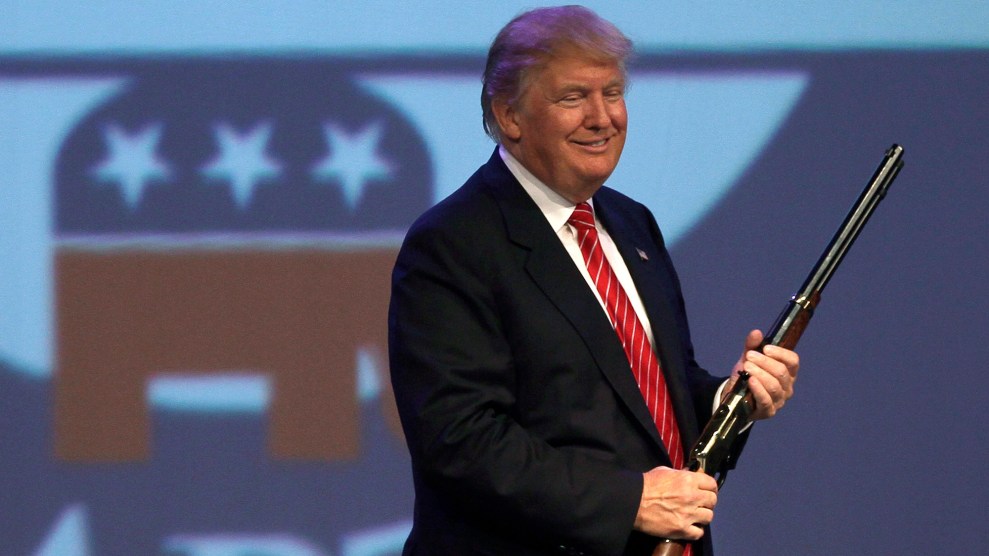 With this saga as a prologue, let’s look at the possible outcomes on possible gun legislation. First, the President is going to act to ban “bump stocks.” This may or may not be Constitutional, but that’s for the Courts to decide. If they rule against him, he can at least say that he was decisive and that he tried.

On the legislative issue, for a bill to get to the President’s desk, it has to pass both houses of Congress. Therefore, any bill that makes it that far will need support from at least a large number of House Republicans. This means that any gun control measure that winds up on the President’s desk, unlike what the screeching conservative pundits would have you believe, would not be selling out anyone’s Second Amendment rights. Rather, if something does make it that far, it will be some of the common-sense background check issues that really do need to be fixed.

That said, however, the odds of a bill reaching the President’s desk is very remote. The President knows this. Hence, the President can be as “liberal” as he wants to be in public meetings. It’s his “I feel your pain” moment. So, how does the President win?

If any legislation passes the House, it will need to be sufficiently conservative. Therefore, it will anger the Democratic base, and Senate Democrats will rail against it and decline to support it. This will make Senate Democrats actually have to vote – against – one of their central, repeated campaign issues.

Democrats Between the Hammer and Anvil

If Senate Democrats decide to support a conservative gun bill coming out of the House, they will be labelled as traitors to the cause by the left-wing of the Party. We are already seeing this on immigration and from primary challengers on the left. Voting “with Trump” on a gun package will be seen by progressive activists as a massive sell-out.

So, either Democrats vote for common sense solutions and anger their base and foster division in their Party, or they vote against the middle ground and look like obstructionists on their own key issue. Either way, it’s a win for the President in an election year.

And what about the scenario where the Senate passes something moderate that winds up dying in the House? Sure, this is the worst case scenario from a GOP public relations standpoint, but the President can go back to the meeting he just had and say that he definitely would have signed the bill, so he can’t be blamed for the bill’s failure.

With regard to the “due process” comments that online establishment GOP folks are freaking out about, let’s remember that the President’s sole goal right now is to be seen as a “man of action.” Proposing things from his gut does not make them law. He knows this. We know this. However, he is tapping into the exact anger and sentiments that people around the country are feeling. This is not an appeal to law, but rather an appeal to emotion. To think that this is some tyrannical streak misunderstands how Trump taps into the zeitgeist. Nothing that will ever become law will get rid of due process. The sky is not falling. It’s been three years, how have folks not figured out how Trump works?

In the end, the President will control the middle ground in this debate, look decisive, and lead his Party to wins in November—even if his detractors fail to see his strategy.